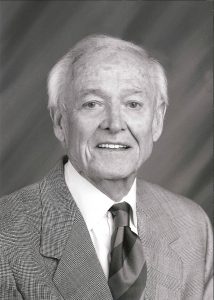 Harold G. Mays began his working career in 1960 after he  graduated from the University of Kentucky. He started  with the Kentucky Department of Highways in the Lexington District Division of Construction. Shortly thereafter Mr. Mays transferred to the Division of Materials in Frankfort. In November 1964, at the age of 28, he was named the Director of the Materials Division. He was an integral part of a group that modernized and updated the Division of Materials policies, procedures, and staff to the level needed to handle the large volume of testing that was required for the completion of Kentucky’s interstates and parkways.

From 1969 until 1971, Harold was the Executive Director of the Kentucky Crushed Stone Association where he worked to secure reasonable regulations for the industry from the Air Pollution Commission and worked on flexible pavement design criteria that would give recognition of crushed stone’s value in pavement structure.

In 1971 he left the Crushed Stone association to join the firm of Harrod-Carter, a crushed stone and ready-mix concrete producer, and the Robert L. Carter Company, a hot-mix asphalt producer and highway contractor in Frankfort. In 1984 he purchased the company and later changed the name to the H. G. Mays Corporation. The company now has hot-mix asphalt plants in Frankfort, Maysville, and Flemingsburg and also operates the Frankfort Testing Laboratory that specializes in asphalt and aggregate testing.

Harold G. Mays has been immersed in the construction industry in Kentucky for over 50 years. He has contributed to advancements in infrastructure across the Commonwealth through the transportation cabinet, industry associations, and as a contractor. Throughout his long and successful career, Harold Mays has made a pronounced impact on the transportation system throughout Kentucky.