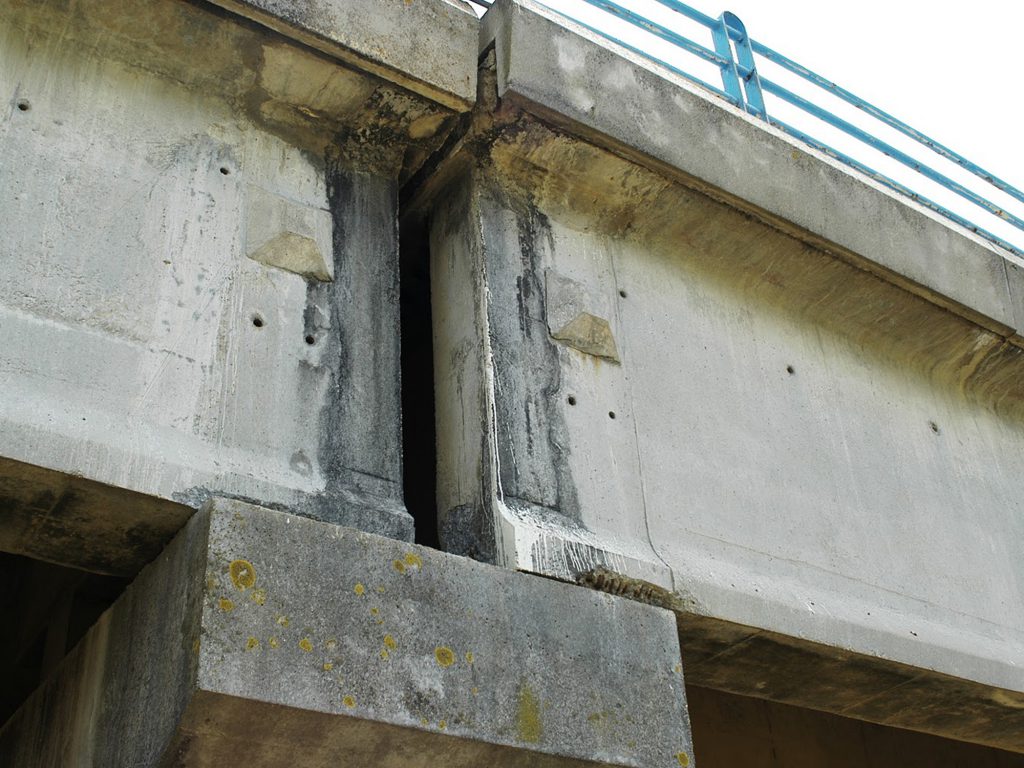 The degradation of structural concrete, especially bridge decks, pier caps, and abutments, is a major problem for transportation infrastructure. A critical driver of this degradation is the application of deicing salts during winter months. The salts most commonly used by KYTC are sodium chloride (NaCl), which is referred to as rock salt or – in its liquid form – brine. Calcium chloride (CaCl2) is also used in liquid form for ice and snow removal when temperatures are lower than 22 degrees F. There are two mechanisms that catalyze degradation in concrete.

The first mechanism is the penetration of chloride ions into concrete. Once a critical concentration is reached at the concrete-steel interface (0.02-0.03 percent by weight of concrete) the corrosion of steel is set in motion. Commonly accepted guidelines specify the thresholds for different magnitudes of steel corrosion:

– 0.03 percent chloride to weight of concrete = initiation of corrosion

Two undesirable conditions emerge when reinforcing steel corrodes. First, the corrosion product expands and creates sufficient internal stresses to break the concrete. This results in cracking, delamination, and spalling. A second problem is that corrosion reduces the cross section of the reinforcing steel to the point – in some cases – where no steel and thus no reinforcement remain.

A second degradation mechanism is that the application of calcium chloride may produce a reaction that generates hydrated calcium oxychloride (Ca(ClO)2). Calcium oxychloride is an expansive material that may break up the concrete, thus enabling higher quantities of contaminants (chlorides) access to the reinforcing steel.

In, Kentucky, epoxy coatings are used on embedded reinforcing steel in structural concrete to ward off corrosion. However, the protection it offers is finite and field data have shown increasing chloride contamination of bridge decks when they are subjected to typical highway service environments (for bridge decks). In decks, concrete cracks and cold joints open up direct paths for chlorides to penetrate to the epoxy and attack the reinforcing steel through coating defects (e.g. pin-holes). Other reinforced concrete bridge elements, abutments, and piers employ more permeable concrete and therefore are more susceptible to damage caused by the wholesale ingress of deicing chemicals. Many existing KYTC bridges contain bare (black steel) reinforcing bars whose protection against corrosion extends only as far as the permeability and depth of the concrete cover. KTC reviewed the use of deicing chemicals in Kentucky, conducted a survey of other agencies focused on the use of deck sealants, conducted a laboratory evaluation of commercially available sealants, and assisted KYTC officials in developing a field application test of promising sealants by producing Special Notes and a Project List of Approved Materials for inclusion in a KYTC rehabilitation project on Interstate 471.